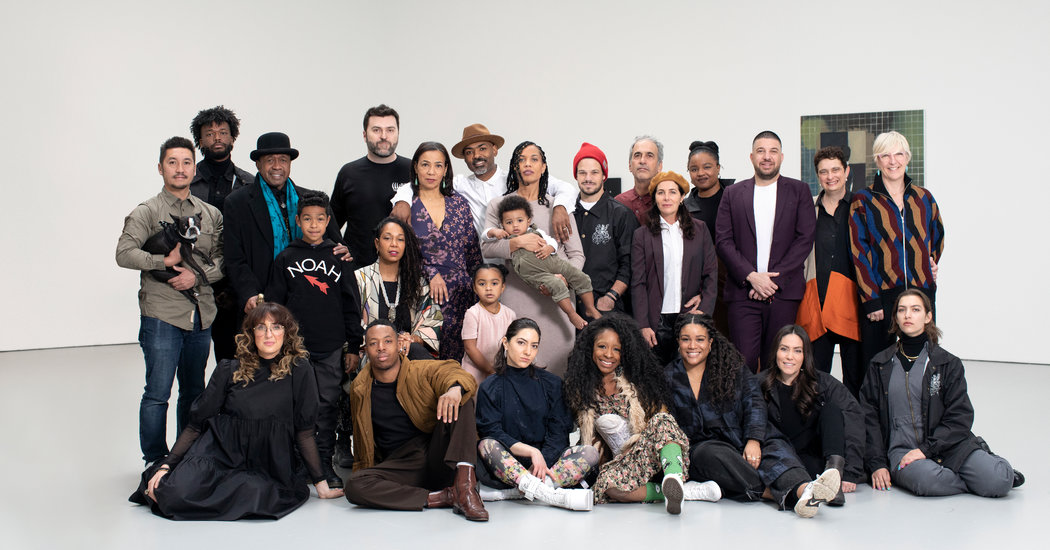 LOS ANGELES — The low-slung building on Washington Boulevard here might seem like a nondescript storefront sandwiched between a carpet installation business and a lawn mower repair shop.

But in the eight years since it was founded, the Underground Museum has become not only one of the most important destinations for black art in the country but also a crucial gathering place for its working class Arlington Heights neighborhood — with a bookstore featuring works by black writers, poetry readings in the wooden bar and events in its back garden including free meditation, yoga and movie screenings.

As cultural institutions all over the world wrestle with how to bring art to the public during the pandemic, smaller ones like the Underground Museum are also trying to figure out how to continue serving communities that have come to rely on them in other ways.

“It’s not just pretty pictures we’re putting on the wall,” said Karon Davis, an artist who created the museum with her husband, the painter Noah Davis, who was the moving force behind the Underground and died in 2015 of a rare cancer at age 32. “We’re actually doing a lot of work for the community.”

Most immediately, the Underground — which is not planning layoffs — is trying to minister to its public by helping deliver produce, continuing its weekly meditation program via Instagram and working to create a neighborhood support program even as residents adjust to life without the museum.

“It was my go-to spot to hang out,” said Jazzi McGilbert, the owner of Reparations Club, a concept store that opened in the neighborhood about a year ago. “I had my mother’s funeral in their garden. It has always been a safe haven for me, so not being able to go — it’s isolating. They’re like my family.”

Christopher Hearn, who regularly attends yoga classes, said he has also come to rely on the Underground as a place “you can go to exhale and imagine at the same time.”

And Naeem Forrester, who works at the nearby Natraliart Jamaican Restaurant & Market, said the Underground Museum had “been a huge influence on the growth of our business in the past few years.”

“We miss the rush of customers from their lively events as well the usual neighborly chats,” Mr. Forrester said. “It definitely feels different not having them around.”

The museum has also become a model for more established institutions on how to connect with a community, while also presenting first-rate exhibitions.

“The best cultural institutions play important roles in their respective communities, far beyond showing art,” said Christine Y. Kim, an associate curator of contemporary art at the Los Angeles County Museum of Art, which itself is trying to reach underrepresented neighborhoods. “The Underground Museum has an energy that we are desperately missing during this quarantine period, especially as we were looking forward to Noah’s beautiful solo exhibition.”

Indeed, the virus crisis took hold just as the museum was about to present the highly anticipated exhibition of work by Mr. Davis, who created the museum to bring art to what he viewed as the cultural equivalent of a food desert.

The show — which was set to open on March 21 after an acclaimed run at Zwirner gallery in New York — would have marked the first formal presentation of Mr. Davis’ work in his own museum and promised to raise the profile of an institution that is otherwise known mostly to art insiders and local residents.

“It was really hard to push the opening,” Ms. Davis said. “It’s been anticipated by the family, the staff and the community and now people really have to wait for it.”

The 27 canvases featured in the Zwirner exhibition were noteworthy for their painterly skill, quotidian beauty and quiet humanity. The installation also paid homage to the Underground, with a “back room” modeled on the museum’s offices; a video montage by Mr. Davis’s brother, the filmmaker Kahlil Joseph; a sculpture by his wife; and furniture designed by his mother, Faith Childs-Davis.

The Underground Museum has always been a family affair, including not only Mr. Davis and his wife — who at first lived on a mattress in the museum with their infant son Moses — but also Mr. Joseph and his wife, Onye Anyanwu, a film producer.

Eschewing the gallery system, Mr. Davis used an inheritance from his father, Keven Joseph Davis — a sports-and-entertainment lawyer, who represented the Williams sisters — to create the studio and home that became the museum.

At first the couple put up their own shows, including one with its own versions of iconic works like Jeff Koons’s vacuum cleaner; because of the museum’s lack of climate control, other institutions would not lend work. Mr. Davis planned a “Purple Garden” in the back of the museum, inspired by European gardens, that would hold only purple flowers.

“It was a bit of a playground for friends and artists to explore ideas,” Ms. Davis said, “very casual.”

Particularly after his diagnosis, Mr. Davis drove himself hard. “He was just on a mission,” Ms. Davis said. “I really feel the museum was a healing project for him.”

Mr. Davis never got to fully realize that mission for the Underground Museum. He left a list of 18 curatorial proposals; the museum has worked its way through four of them so far. The Underground, under its current director, Megan Steinman, has also presented its own shows, featuring artists like Lorna Simpson, Deana Lawson and, most recently, Rodney McMillian.

“He knew time was short,” Ms. Davis said. “Three days before he passed, he was in the garage till 4 a.m. with a morphine bag, painting all the way up to the end.”

In 2014, the curator Helen Molesworth, then at the Museum of Contemporary Art, Los Angeles, discovered the Underground, where she connected with Mr. Davis. They established an official partnership through which MOCA lent work to the Underground, the first of which was a multipart video installation by the South African artist William Kentridge. “I had begun to understand the Underground Museum as an artwork in itself,” Ms. Molesworth said.

Not only did Mr. Davis learn from Ms. Molesworth — she helped upgrade the HVAC and security to make the Underground safer for art — but she learned from him, namely that she could use MOCA’s collection differently.

“I was trying to tell a different story of 20th century art,” she added, “because MOCA had been such a white male institution.”

It didn’t take long for the Underground to come to the attention of celebrities. When the film director Barry Jenkins screened his movie “Moonlight” in the garden, he “was struck by what a diverse crowd it was — tons of black folks, ­people from the neighborhood, white, Latino, Asian,” he told W Magazine. “I thought, this is America.”

The Underground also attracted art world luminaries like Ann Temkin, chief curator of painting and sculpture at the Museum of Modern Art; Thelma Golden, director of the Studio Museum in Harlem; and the artist Glenn Ligon.

“What is it — artist project, kunsthalle, community hub, pop-up museum?” Mr. Ligon said. “It has a spirit and energy unlike other art spaces I’ve ever been to and once I was there I wanted to be part of it, even though I wasn’t sure what ‘it’ was.”

Elizabeth Alexander, the poet and scholar who is president of the Andrew W. Mellon Foundation, which helps support the Underground, visits the museum every time she’s in Los Angeles — often going straight from the airport. “It’s always nourishing,” she said.

Jose Berber, who lives near the museum, said he “was very excited to attend a museum that wasn’t in Beverly Hills or in the Arts District.”

“I felt like those spaces always lacked a voice that I could directly connect with and they were not readily accessible to people outside of those geographic locations,” Mr. Berber said. “The Underground has provided me a space to feel seen, heard, appreciated, and loved.”

The success of the Noah Davis show in New York has also brought Mr. Davis, and by extension the Underground, more market attention.

Mr. Zwirner, who now represents the Davis estate, said he has sold two pieces to major museums and has been fielding requests for acquisitions and exhibitions. Last month, Mr. Davis’s oil painting, “In Search of Gallerius Maximumianus,” sold at Phillips auction house for $ 400,000, five times the high estimate of $ 80,000. (As with most auction sales, the proceeds went only to the seller and Phillips; the museum supports itself through grants and donations.)

If he were still living, what would Mr. Davis say to all of this sudden commercial success? “He would say, ‘I told you so. What took y’all so long?’” Ms. Davis said, smiling. “He was a visionary and he knew it.”

Nevertheless, having the show of his work go on view at the Underground — whenever that does finally happen — is going to be undeniably poignant. “It’s a bit of a coming home,” Ms. Davis said. “Everyone is super excited about Noah coming home.”