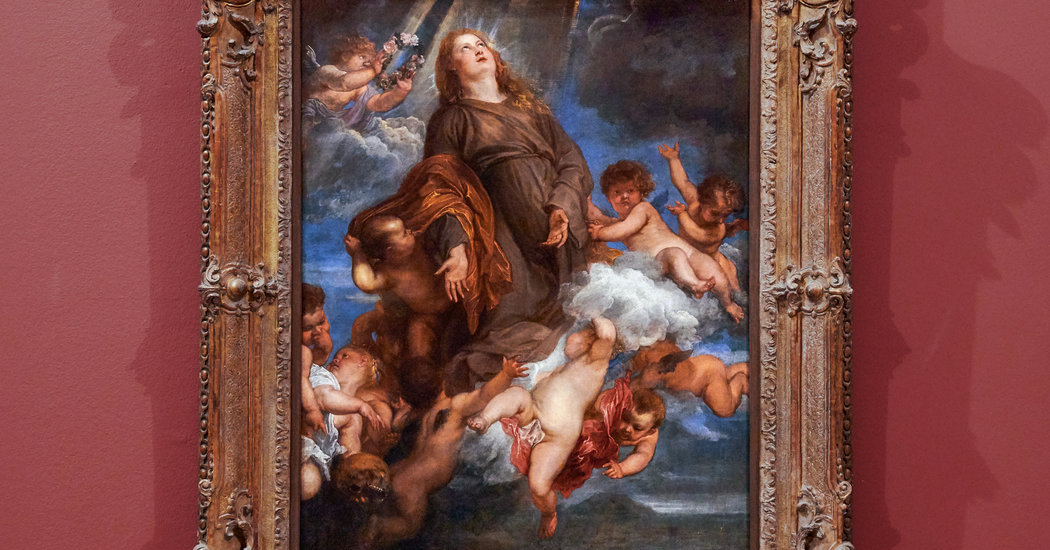 He is dapper, beaming with the confidence of youth; he does not have the temperament for sheltering in place. It’s springtime, the year is 1624, and the 25-year-old Anthony van Dyck is sailing south, to Sicily, where he has been invited to paint the island’s Spanish viceroy.

Van Dyck is establishing his international career as a portraitist to the rich and famous, and he has already had some success in Genoa, London and his hometown, Antwerp. Now, in Palermo, he feels on the cusp of a breakthrough.

He gets the portrait done that spring, but then: disaster. On May 7, 1624, Palermo reports the first cases of a plague that will soon kill more than 10,000, some 10 percent of the city’s population. On June 25, the viceroy whom van Dyck painted declares a state of emergency; five weeks later, he’s dead. Quarantined in a foreign city, the young Fleming watches in horror as the port closes, the city gates slam shut, the hospital overflows, the afflicted groan in the street.

As the emergency wears on, a gang of Franciscans starts digging up the earth on a hill facing the harbor. In a cave they unearth a pile of bones, which, the archbishop’s commission determines, belongs to Saint Rosalia, a noblewoman of centuries past. Rosalia’s relics are paraded through the city as the epidemic abates, and the grateful citizens worship her as the santuzza, the “little saint,” who saved the city.

Rosalia is proclaimed, and remains today, the patron saint of Palermo. Van Dyck — meeting the new demand, and not a little grateful himself — takes a half-finished self-portrait, slathers it with primer and paints the new protectress, floating gloriously over the illness-ravaged port town.

“Saint Rosalie Interceding for the Plague-stricken of Palermo,” painted almost 400 years ago and now in the Metropolitan Museum of Art, is one of five surviving pictures of Rosalia made during Van Dyck’s days in quarantine. It was, in fact, one of the Met’s very first acquisitions, bought a year after the museum’s founding in 1870. You ought to have seen Van Dyck’s plague picture in the first gallery of the exhibition “Making the Met: 1870-2020,” the centerpiece of the museum’s 150th birthday celebrations, which was scheduled to open Monday. Now, of course, Rosalia is quarantined herself as the coronavirus pandemic intensifies. The Met does not expect to reopen before July.

I had the chance to enter the museum last week, ascending through the service entrance to meet Max Hollein, the Met’s director, and Quincy Houghton, its deputy director for exhibitions. It was a joyless visit. In the Great Hall, the large urns sit bereft of their usual immense sprays of fresh flowers. A skeleton crew of guards was stationed at tables, accompanied by industrial-size jugs of hand sanitizer. The lights in many galleries were off, the gates around the gift shop drawn. Sometimes being in an empty museum gives me a thrill, but this locked-down Met, without a public, left me miserable.

Rosalia, though, is already in her assigned spot for “Making the Met,” which had been nearly installed before work halted in mid-March. She seems, at first glance, to be ascending to heaven with the help of nearly a dozen cherubim, and a shaft of light beams onto her ruddy face through dark clouds at the top of the painting. I spent a while examining its light coloring, its Titianesque brushwork; this is one of the Flemish artist’s most Italian-looking paintings.

It is a deceptive painting. Look fast and you might easily confuse this for an Assumption of the Virgin, and indeed the saint was incorrectly identified when the Met bought the picture during its first year in business. (“Making the Met” also includes an 1881 painting of the museum’s first location on 14th Street, with the mislabeled Rosalia clearly visible.) The confusion was understandable outside Sicily. Unlike Peter with his keys or Catherine with her wheel, this little-known saint did not have a set of standard attributes until the plague struck.

Our Flemish upstart therefore had to invent an iconography for the woman who stopped the epidemic. Van Dyck decided to picture Rosalia as a young woman with long, blond, kinky hair, cheeks blushing, eyes wide with ecstasy. Beneath her, energetically sketched in a washy palette of ocher and green, lies the harbor of Palermo, and in the background is Monte Pellegrino, the hill where her relics were found.

The artist gave one of the putti bearing her forward a wreath of pink and white roses, a reference to her name. Another, at bottom left, is pawing a human skull: the skull of Rosalia herself, which was paraded through the quarantined city almost as soon as she came out of the ground. It seems certain that Van Dyck would have seen the first of these processions in locked-down Palermo, which still takes place every July, and which are as Baroque as one of the artist’s altarpieces. The Festino di Santa Rosalia remains one of the largest festivals in Italy, a mix of sacred and secular, with rock concerts and pasta sampling mixed in with prayer.

For New Yorkers barracked in our houses and apartments, or doctors and nurses scrambling for face masks, beseeching a saint to end an epidemic may not sound sufficient. Yet the curator Xavier F. Salomon, who organized a 2012 exhibition on Van Dyck’s Sicilian sojourn (and who is now chief curator of the Frick Collection), has shown that the rulers of plague-hit Palermo relied on both medical and religious interventions to stem the contagion. Palermitans could pray to Rosalia’s remains in the city’s cathedral, but only while observing strict social distancing: You could visit on just one day a week, determined by your address.

One edict proclaimed that, while the city should pray for “the intercession of glorious Saint Rosalia,” nevertheless “the human instruments and industry should not be set aside.” That included strict limits on movement, and regular recording of the ill and the dead. The sick had to isolate themselves on pain of excommunication, and worse; the archbishop warned that “they will be cursed with Lucifer, and Judas and all the Devils in hell.”

Young Van Dyck, who could have relied on his royal connections to get out, stayed through it all. He found, amid pestilence, a subject more urgent than the courtly portraits that would eventually make his name.

What could a painter, and a foreign one at that, offer this city? So much more than a picture to pray before. Having endured a quarantine which shut down his international career, having survived an epidemic that could have cost him his life, Van Dyck crafted in Palermo an incarnation of beneficence in chaos. Plagues are random. They are merciless. They are, I’m now learning, most terrifying for their uncertain duration. Yet Rosalia, floating over Sicily like a hot-air balloon, promises that the horror of epidemic will lift eventually, and beauty will return.

I could hardly appreciate the privilege of seeing her all alone at the Met last week, so furious was I that this new plague had deprived us of the balm of art in common. New York’s imported guardian must remain in seclusion, as must Van Dyck’s four other Rosalias, two in Europe (at the Prado in Madrid and Apsley House in London), and two in the United States: one in the Menil Collection in Houston, another at the Museo de Arte de Ponce, Puerto Rico.

As for Sicily, where images of the saint are ubiquitous, the infection rate today is far lower than in Italy’s richer northern provinces, but the island’s tourist economy is getting hosed. In grim times you have to believe — if not in saints, then at least in art. All it can offer, in good times or bad, is a view of the world we want to live in rather than the world at hand. It can affirm the human capacity for invention even when death is stalking your studio door.

Rosalia will be there for us when “Making the Met” eventually opens, and in July, we have to hope, she will remind us of a Palermo that is finished with lockdowns. “Viva Palermo e Santa Rosalia!” they shout every year as the image Van Dyck crafted parades through the capital, amid a crush of bodies — in streets or museums — that I usually find claustrophobic but now find myself desperate to rediscover. We just have to wait. For now, in New York, the Met’s website can help. In Sicily, the faithful can pray to Saint Rosalia via WhatsApp.