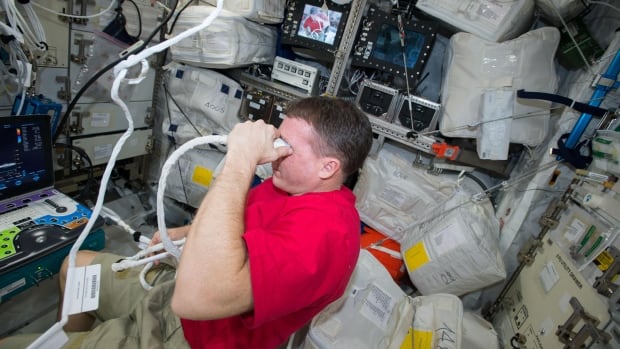 Astronauts on long missions to Mars or the International Space Station could one day don swim goggles to help preserve their vision.

It’s estimated up to 75 per cent of astronauts develop changes in their eyes, such as reduced sharpness in their vision, when in space for three months or more.

In one 2018 study, six months in space was found to lead to a thickening of the retina near the optic nerve, which contributes to fuzzy vision. As for why, it could be because of the effects of gravity on fluid pressure at the back of the eye.

Some astronauts return to normal in short order but in others, the eye syndrome, called spaceflight-associated neuro-ocular syndrome (SANS), can last for several years after returning to Earth.

Now in a small study published in Thursday’s issue of the journal JAMA Ophthalmology, researchers tested 20 healthy men at NASA’s Johnson Space Centre in Houston. Half were given swimming goggles to wear during exercise and the other half were not.

The men did the exercises while on their backs with their heads tilted back 15 degrees to simulate the effects of space.

This was really exciting for us to look at these new technologies that astronauts could potentially use to not only monitor but also intervene for future missions.– Jessica Scott

The goggles press the skin around the eye, which might increase pressure in the eye to reduce some of the harmful effects of long spaceflights, the researchers said.

“Swimming goggles is a very simple tool that can increase the ocular pressure,” study author Jessica Scott of Universities Space Research Association in Houston said in a journal podcast.

“This was really exciting for us to look at these new technologies that astronauts could potentially use to not only monitor but also intervene for future missions.”

The study’s authors cautioned that wearing goggles while exercising in space needs to be investigated further, for instance to see how long the pressure increases last and to assess the long-term effects.

In a journal commentary, Dr. Andrew Lee of the Blanton Eye Institute in Houston commended the authors, calling their work interesting.

“Because the use of swimming goggles is probably a safe, inexpensive, lightweight, commercially available, and feasible countermeasure, it might be a readily testable hypothesis on future International Space Station missions.”

Astronauts have long worked out in space to try counter the bone loss they face in the weightless environment of space.